What Is A Cuckoo Catfish?

Synodontis multipunctatus, aka the cuckoo catfish, is a popular medium-sized bottom-dweller that reproduces using brood parasitism, similar to the cuckoo bird (hence its name).

Brood parasitism occurs when a host parent is tricked into raising the young of another species.

In their natural habitats cuckoo catfish parasitize African cichlids, which is why they need cichlid tank mates if you plan on breeding them.

This species is not well-equipped to deal with cooler water temperatures, and should not be kept in a tank cooler than 75°F.

What Is the Best pH For Cuckoo Catfish?

While they are capable of tolerating water conditions of varying ranges, keeping their environment as close to 7.8-8.8 pH and 8-12dH is ideal for the comfort of your catfish.

How Large Can Cuckoo Catfish Grow?

Cuckoo Catfish grow to an average of approximately 6 in. (15cm) in an indoor aquarium, however, can grow to be as large as 10 inches (27.5 cm) in the wild.

The size of your catfish directly depends on the diet it is being fed, and since you’ll need to feed your catfish much more insects/vegetation in order to dull its predatory instincts, aquarium cuckoos are often smaller than their wild counterparts.

What Is The Best Diet For Cuckoo Catfish?

The Cuckoo Catfish is omnivorous, however, you should be feeding it a slightly more vegetarian/pellet-based diet if you plan on keeping it in a community tank.

Cuckoo catfish will eat almost anything you give them, including pellets, flakes, as well as live or frozen prey.

To discourage predation of other species in the same tank, we recommend primarily feeding your catfish 2-3 times per day with vegetable matter and sinking pellets, with occasional supplementation of live/frozen foods such as brine shrimp or bloodworms.

What Is The Average Lifespan For Cuckoo Catfish?

The cuckoo catfish has an average expected lifespan of between 15-20 years in captivity, however, there have been several reports of cuckoos living as long as 27 years.

One major lifespan-impacting factor to keep in mind is the genetics of your catfish, as they are also used by some breeders to produce more colorful species variations.

Consequently, catfish spawned by these fish farmers may have genetic defects that are passed down through generations of breeding.

Thus, it is important to ensure you are acquiring your catfish from a reputable source.

What Is The Minimum Tank Size For Cuckoo Catfish?

As juveniles, cuckoo catfish can be stored in tanks as small as 15-gallons, with larger cuckoos needing a tank size of at least 50-gallons.

If you plan on keeping a group of more than 5-10 fish in the same aquarium, we recommend increasing your minimum tank size to 55-60 gallons.

What Is The Best Cuckoo Catfish Tank Setup?

The Cuckoo Catfish prefers conditions similar to its natural habitat in Lake Tanganyika, where it inhabits the littoral and benthic zones.

As far as substrate is concerned, cuckoos prefer coarse gravel.

Keep your cuckoo happier and healthier by ensuring their tank is providing optimal environmental conditions.

What Is The Best Way To Breed Cuckoo Catfish?

The best way to breed cuckoo catfish is by providing them plenty of mouth brooding cichlids as tank mates.

It may be difficult to understand how increasing the amount of tank mates could boost the odds of successful cuckoo breeding, but since cuckoo catfish reproduce by brood parasitism, the more cichlids in their tank, the more chances they have to parasitize their breeding cycles.

Rather than being stimulated by their biological clock, cuckoos are triggered by the smell of breeding cichlids.

At this point, the catfish wll eat some of the cichlids eggs and replace them with cuckoo eggs, or just sneak the eggs in without eating any from the cichlid.

Shortly after the female cichlid mistakenly takes the eggs into her mouth for incubation, the cuckoo’s eggs will hatch, feeding on the cichlid eggs.

After about a week the fry will be able to swim freely, although you can fee them baby brine shrimp to speed up the growth process.

When gendering your cuckoo catfish, we recommend looking at the genital papillae, as it can be different to differentiate between male and female based on appearance alone.

However, males often tend to be slightly larger and more brightly colored.

Cuckoo catfish are extremely territorial with most other fish, however, the best tank mates are going to be members of the cichlid family.

Examples of good tank mates include:

We recommend keeping between 3-5 tank mates for your cuckoo catfish to experience optimal comfort.

Where Can I Find Cuckoo Catfish For Sale?

Cuckoo Catfish can be found for sale online at a variety of independent merchanidisers as well as aquarium shops, for prices ranging from $10-30 depending on the size and species variant.

We recommend thoroughly researching your catfish supplier before purchasing, as you may be able to find the same fish for a similar or lower price than being offered by one particular online retailer. 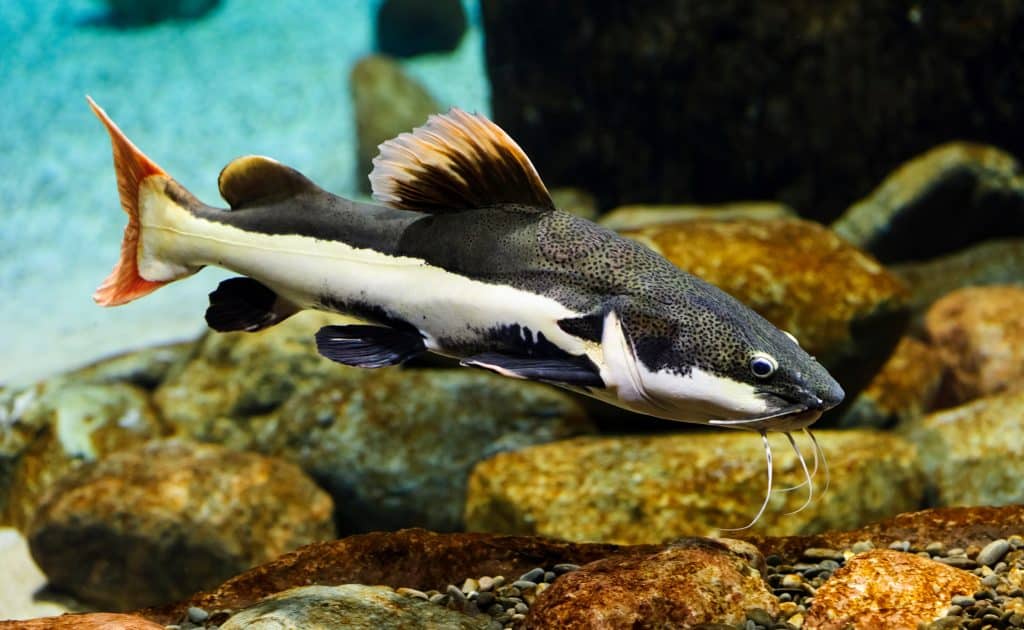