Flying Fox Fish can be seen at the bottoms of fast-moving freshwater currents of Indonesia (The Greater Sunda Islands, specifically Borneo, Java, and Sumatra), Peninsular Malaysia/Thailand, and Singapore. Flying Fox Fish migrate seasonally to forested areas and bottomlands during the rainy season. However, this has been disturbed due to urbanization and habitat destruction. In the last few decades, their populations have depleted significantly, and their distribution means wild-caught specimens are unobtainable.

Their genus name may be referencing the barbels near their mouth, which are sensory organs that store their taste buds, allowing them to forage food. “Epalzeo” is Ancient Greek for “horn,” alluding to the whiskerlike protrusions on their snout, and “rhynchos” translates to “snout or beak. Flying Fox Fish were first described in 1850 by Pieter Bleeker, a Dutch medical doctor, and later ichthyologist. Bleeker was stationed in Indonesia, where he would go on to collect over 12000 specimens of fish.

Flying Fox Fish are good for intermediate fish keepers, with their tank size and temperament being the most difficult to handle. While they can make good community tank members, each fish has its own personality, and a Flying Fox Fish may not be able to get along with others, even with the necessary precautions taken. Their tank must be large enough to accommodate this fish’s active nature and territorial habits. With this, the stress will cause them to perish.

Although keeping Flying Fox Fish comes with challenges, they are hardy and can make wonderful pets for the right owner willing to provide them with the correct environment. It is vital that fish keepers do their research on this species because, despite their popularity, fish shops often don’t provide the correct information regarding their care and lifespan, which can sometimes exceed 15 years.

A freshwater demersal species, the Flying Fox Fish requires a mildly acidic to neutral pH of 6.5 to 7.3. When it comes to water hardness, slightly soft to moderate is recommended, between 5° to 10° dGH (89.3 to 178.6 ppm). Flying Fox Fish are intolerant of Nitrate, Nitrite, Ammonia, and Chlorine, so levels are desired at 0.

Despite their relatively small size, a single Flying Fox Fish needs a tank of at least 55 gallons. A group of Flying Fox Fish will require a tank size of over 100 gallons. These are extremely active fish that are native to fast-flowing rivers, currents, and streams. Therefore, this species must have enough space to swim around. If aquarists plan to add a Flying Fox Fish into a community tank, this will need to be large enough to accommodate all the fish. A rectangular tank would be ideal as they typically dwell in their quarters’ middle or bottom sections.

An omnivorous species, the Flying Fox Fish is often mistakenly marketed primarily as an “algae-eater,” with beginner aquarists thinking this is their only food source. Although they consume algae as juveniles, they grow out of this behavior and prefer to eat a varied diet of protein, vegetables, biofilm, and plant matter (including algae). Flying Fox Fish may or may not eat black beard algae and hair algae – it will depend entirely on each individual fish.

However, they will not eat red algae at all and always prefer green algae. Their diet should focus heavily on vegetation, and hobbyists can feed this species: algal-based flakes/wafers; cucumber; blanched zucchini/spinach; shelled peas; lettuce; vegetable flakes; Spirulina; vitamin-enriched tablets/granules, and even some chopped fruit.

While Flying Fox Fish tend to stay at the bottom of the aquarium, they will occasionally relocate to the midwater to feed on the biofilm that forms on rocks and other solid surfaces in their tank. During feeding, Flying Fox Fish will also travel upwards to grab morsels of food/pellets or exhibit territorial behavior. Thus, in order to avoid aggression towards the other stock, food should be scattered all over the tank.

In the wild, Flying Fox Fish can live up to 15 years. In captivity, with the proper conditions, this species lives an average of 8 to 10 years, so fishkeepers looking to purchase them need to be ready for the long commitment.

Flying Fox Fish are skittish as juveniles, preferring to spend their time hiding. Once they mature into adults, they become progressively territorial and aggressive towards fish with similar appearances or peaceful bottom-dwellers. In the wild, this fish exhibits introverted behavior with its own kind, especially if they are males (unless it is spawning season).

Flying Fox Fish can settle into a community tank under the right conditions, and they tend not to bother other, more diverse, resilient, and active species. Shy, peaceful, and timid fish are not to be housed with Flying Fox Fish as they may end up being bullied to death.

How many Flying Fox Fish should be kept together?

As a general rule, Flying Fox Fish should not be kept with their own species or similar-looking fish due to their highly territorial nature. One Flying Fox Fish per tank is advised because this will ensure they remain reasonably unaggressive with their tank mates. When placing them within a community tank, they should be the last and final fish added to prevent them from claiming the whole tank for themselves. Flying Fox Fish need a large enough tank, with plenty of foliage and hiding, with one Flying Fox Fish needing their own territory of at least one meter.

Bettas are not ideal as tank mates because they are slow-moving fish with extremely high aggression levels.

Shrimp are a peaceful, low-activity, bottom-dwelling species that are incompatible with the more intense, confrontational Flying Fox Fish, who will see them as prey.

Discus are slow-moving, peaceful, and meek in nature, making them incompatible with the more active, combative Flying Fox Fish.

Flying Fox Fish occupy fast-flowing Southeast Asian rivers and streams at the bottom of mountain ranges. Thus, a biotope replicating their natural habitat would be ideal. Aquascaping is a great choice for this species, although the tank must be fitted with a tight lid and no visible gaps present because even floating plants won’t deter a Flying Fox Fish from jumping out (hence their given name).

Their planted tank should be lined with a combination of nutrient-rich and inert substrates, such as fine rounded gravel; some large pebbles, soft sand, and carpet plants will make this bottom-dwelling fish feel right at home.

Hardscapes can provide hiding spots and shady places for Flying Fox Fish to escape during trivial territorial disputes, and keepers can choose a combination of driftwood; driftwood branches/roots; water-worn rocks/boulders; bog wood (abonos), and cobbles. The variably sized decor will provide a more natural appearance and remain practical for the fish who appreciate visual barriers.

Fresh aquatic plants are recommended, with broad-leaved, hardy plants being the best option for Flying Fox Fish. Some plants, such as Anubias, Microsorum, Bolbitis, and Java Ferns, can be secured manually with thread/string, fishing line, or a rubber band to the driftwood.

Bright light will encourage the growth of algae, which the Flying Fox Fish will graze on, although fish keepers may find it easier to buy lights with timers in them, as excessive algae growth can become a problem. Algae plagues can spike pH levels too high; deplete oxygen at night; block aquarium filters; and trap fish or take away their much-needed swimming space. The correct amount of algae means Flying Fox Fish will enjoy foraging for micro-organisms amongst the algal growth.

As a fish that inhabits and migrates through fast currents, they are unable to survive without high/moderate water flow, and high levels of dissolved oxygen and remain sensitive to too much bio-load. A weekly 20% water change should be carried out in order to keep water conditions ideal, with tap water sitting for a minimum of 3 days and de-chlorinators poured into the tank before adding the new water.

There have been no recorded cases of successful breeding attempts with captive Flying Fox Fish by hobbyists. Commercial breeding of this fish is done in professional hatcheries using hormones. Wild Flying Fox Fish reproduce through spawning, but little information is known about their breeding.

While sexual dimorphism is present in Flying Fox Fish, it is exceptionally difficult to tell the difference between males and females, especially when they are juveniles. Fish keepers are able to identify sexually mature females by their body’s thickness in comparison to their male counterparts, that are slim-bodied.

The most common illness the Flying Fox Fish will encounter is in the form of bacterial, fungal, and parasitic infections. It is important to quarantine these fish for 4 to 6 weeks before adding them to their main/community tank, as this will prevent the spreading of infectious diseases. This species may suffer from Ichthyophthirius multifiliis, Ich, or White Spot Disease – the most common disease. Ich is caused by an external parasite that can be seen across Flying Fox Fish’s bodies in the form of white spots. This can be treated by over-the-counter fish-safe medications and by quarantining the sick Flying Fox Fish in a separate (hospital) tank.

The best way to prevent disease in this species is to make sure their diet consists of high-quality food (deters constipation and organ issues); perform water changes every two weeks (stops excessive bio-load); avoid adding artificial decorations (may be coated with paint/toxins); and never over-stock a tank, as this will stress out Flying Fox Fish. Using testing kits on a weekly basis will help hobbyists spot potential issues before they develop into something irreversible.

Because of their small size, a hobbyist may mistakenly purchase an inadequately sized tank. This causes excessive stress for the active Flying Fox Fish, who dislike cramped, constrictive aquariums – which ultimately leads to disease. Any signs of unusual behavior, such as timidness or a sudden interest in hiding, can signify fatigue. This indicates that there is something wrong in the surroundings, e.g., incorrect water parameters. A sick or frightened Flying Fox Fish will have the black stripe on the side of their body turn paler, so unless a new fish has been added to their tank, this is a sign of ailment.

Where can I find Flying Fox Fish for sale?

Flying Fox Fish are typically between $4 to $6, often sold in groups at a discount. Although, it is advised that aquarists avoid having a species-only tank with these fish because of their high aggression towards each other.

Flying Fox Fish (Epalzeorhynchos kalopterus) are often mistaken for Siamese Algae Eater (Crossocheilus oblongus), despite the two being completely different species. At first glance, an aquarist might not notice their differences as they’re quite subtle, but this becomes more significant when picking tank mates for a community aquarium. 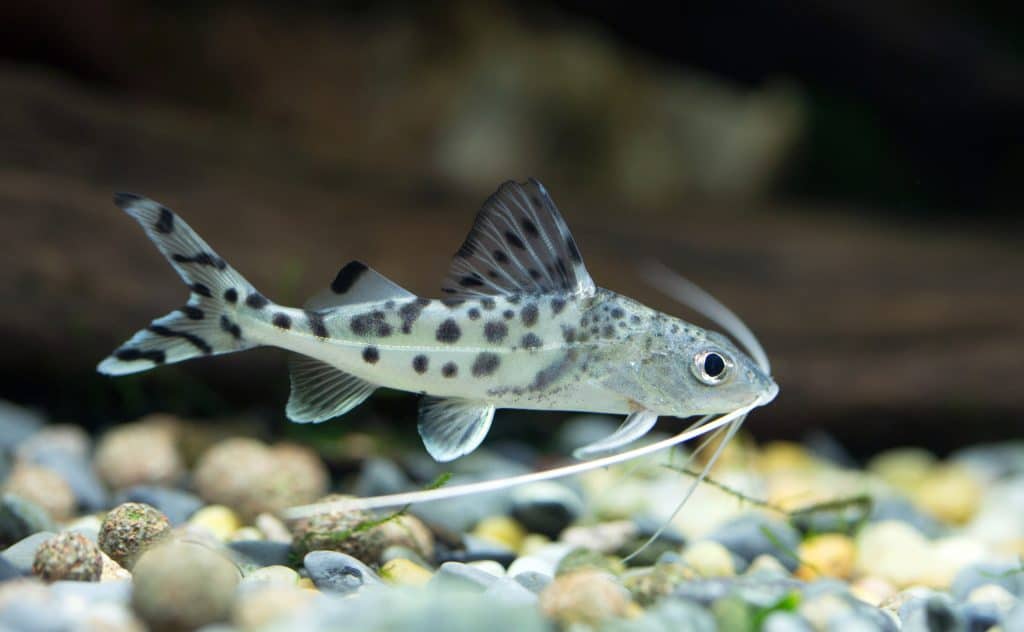 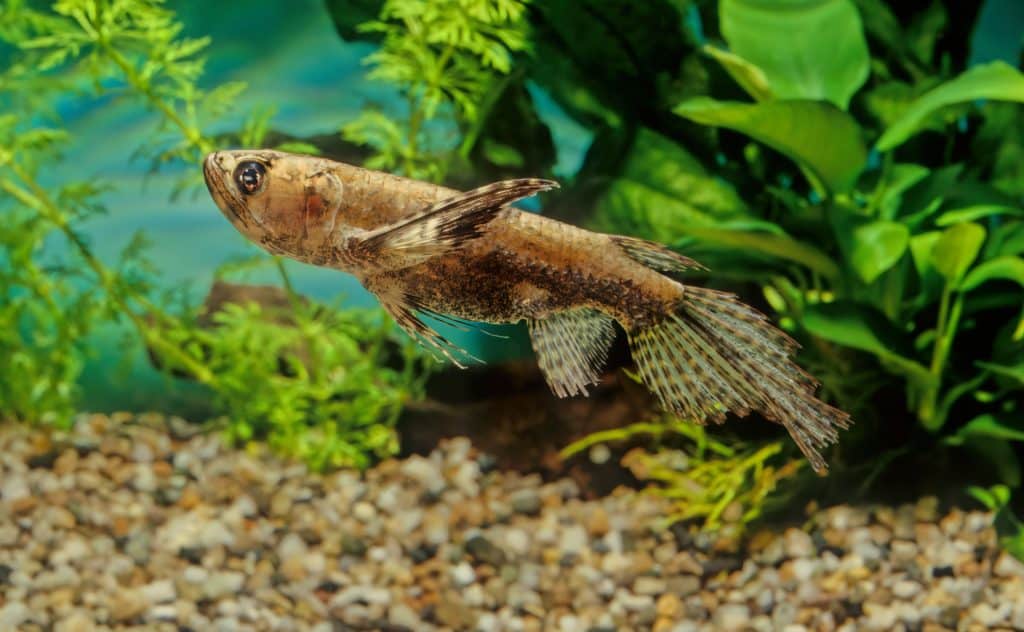 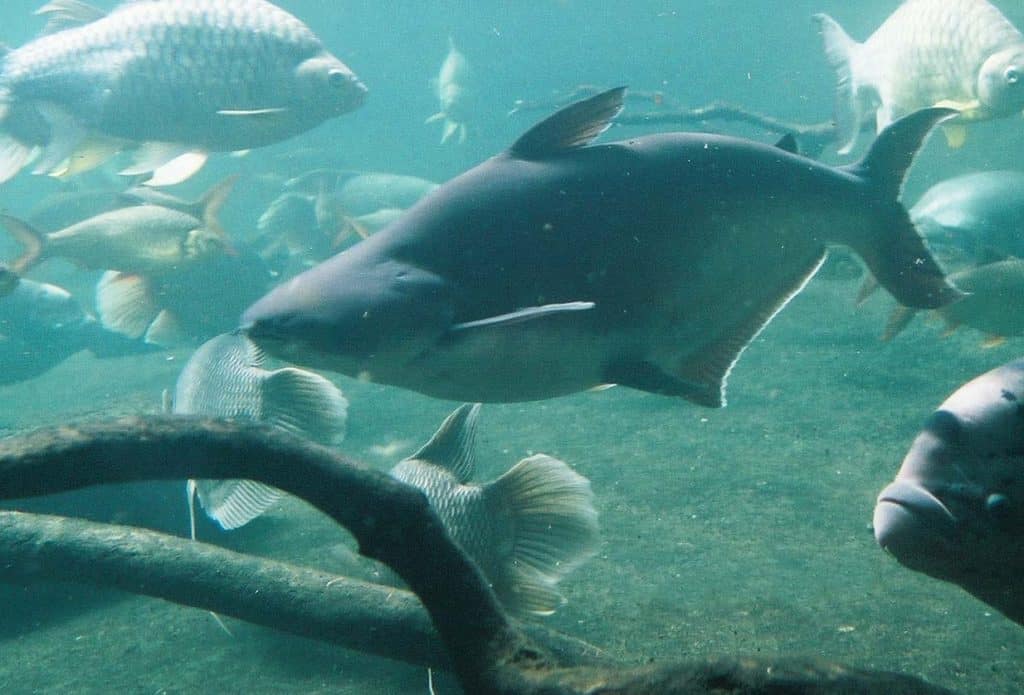