This post may contain affiliate links and we may be compensated if you make a purchase after clicking on the links.

The name Pleco is actually short for Plecostomus. Plecostomus is the name of a type of freshwater catfish that has become very popular in the aquarium hobby. There are many different types of Plecos out there. You can use this short list to determine which species of Pleco is right for your home aquarium.

Bristlenose Pleco is one of the most common types of Pleco available. You will be able to easily find these Pleco in pet stores for sale as they are fairly easy to care for and do not grow to the same larger sizes as other species of Pleco. You can expect a somewhat bland color variety to these Pleco as they come in darker greens, browns, and grays with yellowish-colored spotting covering their entire body. Bristlenose Pleco are nocturnal and should be fed a diet that includes finely chopped fresh veggies

Clown Plecos prefer warmer waters and will require a heater for their tank. Clown Plecos do not grow to the impressive size of some Plecos; they are considered Dwarf Plecos because of their size. These Plecos have bands instead of spots. They have a similar coloration to the Bristlenose Pleco. These Plecos are often chosen because of their helpful quality of eating the algae in their tank. Algae make up an important part of their diet, and you will see your Clown Pleco spending most of its time eating the algae off the decor, substrate, and even walls of your aquarium.

Zebra Plecos are named after their markings that resemble a Zebra. They are black and white striped and make for a beautiful addition to any home aquarium. These fish are different from typical Plecos as they do not latch onto parts of the aquarium to feed on algae. Instead, they do best when fed sinking wafers or pellets. If they are cared for properly, Zebra Plecos can live anywhere from 10 to 15 years in captivity. Zebra Plecos are not nocturnal as much as they are just shy. During the daytime, when most fish are out swimming about, Zebra Plecos can be found resting and hiding in crevices and caves while most of the other fish are in action.

Common Plecos can grow to be rather large. They can grow up to 24 inches in length at full maturity. This type of Pleco is often referred to as sucker fish. This particular species comes from South America. More specifically, Brazil, Trinidad, and Tobago. Common Plecos have started showing up in other parts of the world due to pet owners releasing them into the wild. Because of this and their hardy nature, they have even been considered invasive in some parts of the world. Common Plecos have a longer-than-average lifespan than many other Plecos. For coloration, the Common Pleco is simple. They are usually a plain brown color with black splotches covering their bodies.

Gold Nugget Plecos are one of the more beautifully colored Pleco species. They have dark-colored bodies that are spotted with gold. Their fins also have the appearance that they were dipped in gold. They are often chosen for their beautiful appearance. These Plecos can grow up to 10 inches in length at full maturity and can live up to 5 years when cared for properly. Gold Nugget Pleco can be found in the wild in northern Brazil. Golden Nugget Plecos are not picky eaters and readily accept whatever food you feed them. Sinking algae wafers and sinking pellets are recommended.

Blue Phantom Plecos are one of the more expensive species of Pleco. A single of these fish will cost you around $26 to $75. These Plecos can be found in Venezuela in the fast-moving waters of the Orinoco River. They have a lighter, bluish body coloration with lighter blue spotting all over their bodies. This type of Pleco prefers a current and will spend most of its time finding places to hide and scavenge for food. Blue Phantom Pleco tend to do well in larger community aquariums as long as their needs are being met. Like most Plecos, they need to be fed correctly to remain healthy.

Royal Plecos are an interesting species that are known for their ability to digest various types of wood that you would place in your aquarium. They like to nibble on the wood and digest it. Royal Plecos have darker-colored bodies with uneven black stripes that run along the length of their body. They have a slower growth rate than other species of Pleco, but they can still grow up to 17 inches in length at full maturity. This species of Pleco is omnivorous. Their diet should include regular algae wafers or sinking pellets and the occasional protein snack once or twice a week.

Snowball Plecos get their name from their markings. They have dark, almost black colored body with white dots that resemble little snowballs dotting their bodies from head to tail. This species of Pleco not only looks beautiful but can also be a helpful little addition to the right community tank. Snowball Pleco are bottom-feeding fish that will sift through the substrate for food. This helps keep the water quality better in the aquarium overall. This does not mean they can subsist solely on aquarium algae and leftover fish food. They will need to be fed the appropriate diet as well. As long as the food you are feeding them reaches the bottom of the tank where they eat, they should be good. Snowball Plecos can live an average lifespan of 8 to 10 years if cared for properly.

Sailfin Plecos, sometimes referred to as the Leopard Pleco, are a species of Pleco that can live for a very long time. If cared for properly and maintained in the appropriate setup, they can live up to 20 years. They can grow rather large, and at full maturity, they can grow 13 to 19 inches. Sailfin Plecos require a much larger tank for the house than other Plecos, which will often deter people from purchasing them for their home aquariums.

Leopard Frog Plecos are chosen for home aquariums for their looks more than they are helpful at cleaning algae. Leopard Frog Plecos will eat some algae but prefer a more protein-based diet. They love frozen foods such as brine shrimp or bloodworms with the occasional plant snack. Leopard Frog Plecos have bodies that range in color from yellow to white, with thick black lines that cover their bodies and fins in an interesting pattern. These beautifully colored Plecos live 8 to 10 years on average and only grow to around 4 inches at full maturity.

Butterfly Plecos are one of the more unique species of Pleco as they have the ability to change their color to help them blend in with their environment. If they are resting on a bright-colored substrate, they will display their brighter patterning, but when resting on a darker substrate Leopard Frog Plecos display their darker pattern. It is recommended that they are kept in an aquarium with a lighter-colored substrate to help them show off their brighter colors.

This species is primarily herbivorous, enjoying the occasional protein but rarely. You will see your Butterfly Plecos come out during the daytime to eat during meals, but mostly, the Butterfly Pleco is a shy species of Pleco that will come out of hiding at night. Butterfly Plecos appreciate meals of finely chopped, fresh veggies. Cucumbers, zucchini, blanched spinach, and romaine lettuce are among their favorites. Butterfly Plecos like to breed in caves, and it is a good idea to set up a few in their tank if you are trying to make them comfortable enough to spawn.

Rhino Plecos are sometimes referred to as Alligator Plecos or Chocolate Plecos. Rhino Plecos have a nasal flute on each side of their head that resembles horns. Other types of Plecos have 8 rays on their dorsal fins, while Rhino Plecos have 10. This makes them easier to identify. They have dark brown colored bodies with thick, dark lines covering their bodies in an interesting pattern.

This species is considered an omnivore, but you should use caution if you put it in a tank with many plants. Not only will the Rhino Pleco feast on all but the toughest of aquarium plants, but they will also eat floating plants as well. Rhino Plecos are considered peaceful fish that can go into most community setups without much difficulty, but they will become aggressive with other bottom-dwelling species if they are not given adequate space.

Even though more of these Plecos have been introduced into the aquarium trade recently, the Blue Eyed Pleco is still considered a rather impressive and showy fish with a rather hefty price tag. If you can find one of these fish for sale, you can expect to pay around $250 to $350 per fish. Blue Eyed Pleco live in fast-moving waters in the wild, and they attach themselves to driftwood. This Pleco species requires a special diet and will have to be supplied with wood to eat, attach to, or hide under.

Typhoon Pleco, or Fire Spot Cactus Pleco as they are often called, is a highly coveted species of Pleco due to its beautiful coloration. This species is not only highly sought after but also very expensive. You can expect to pay around $1000 per Typhoon Pleco. They are a predatory species of Pleco that require mussels, and shrimp are a must for Typhoon Pleco. Their diet also needs to be supplemented with high-protein flaked foods. It is not likely that you will be able to purchase one of these species of Pleco as they are not allowed to be from Brazil, and there are no reports of anyone being able to breed them successfully in captivity.

Candy Striped Pleco are a very timid species of Pleco that will most likely only come out at night. It will spend the majority of the day hiding in driftwood or caves. They do best when set up with plenty of cover and hiding places. Candy Striped Plecos will eat algae in the home aquarium, but they are not to be used as an efficient means of algae control as they eat it off of the aquarium decor rather than the glass.

Peppermint Plecos can be a rather pleasing addition to the home aquarium as they do not require much to make them happy. They can be seen eating algae in your tank, from the glass and the decor, and helping clean up the messes left behind by other fish. They are not particularly aggressive or territorial. They do best when kept in a warmer tank with a steady current.

The key to the happiness of the Peppermint Pleco lies in its diet. They should be fed a high-quality sinking pellet and have their diet supplemented with finely chopped, fresh, green veggies. Peppermint Plecos have dark-colored bodies with tiny light-colored dots covering them. If they are maintained properly, you can expect Peppermint Pleco to live an average of around 7 years.

Sultan Plecos are considered omnivorous scavenger fish but are not particularly helpful at algae control in the home aquarium. Sultan Plecos have grayish-cream-colored bodies with black spots. Sultan Plecos do well in most community setups with other bottom-dwelling fish as long as they are provided with enough room. They are a more timid species of Pleco, but you will still be able to see them out during the daytime as long as they are given plenty of places to attach themselves to. They are plant safe as they will not go after your aquarium plants. 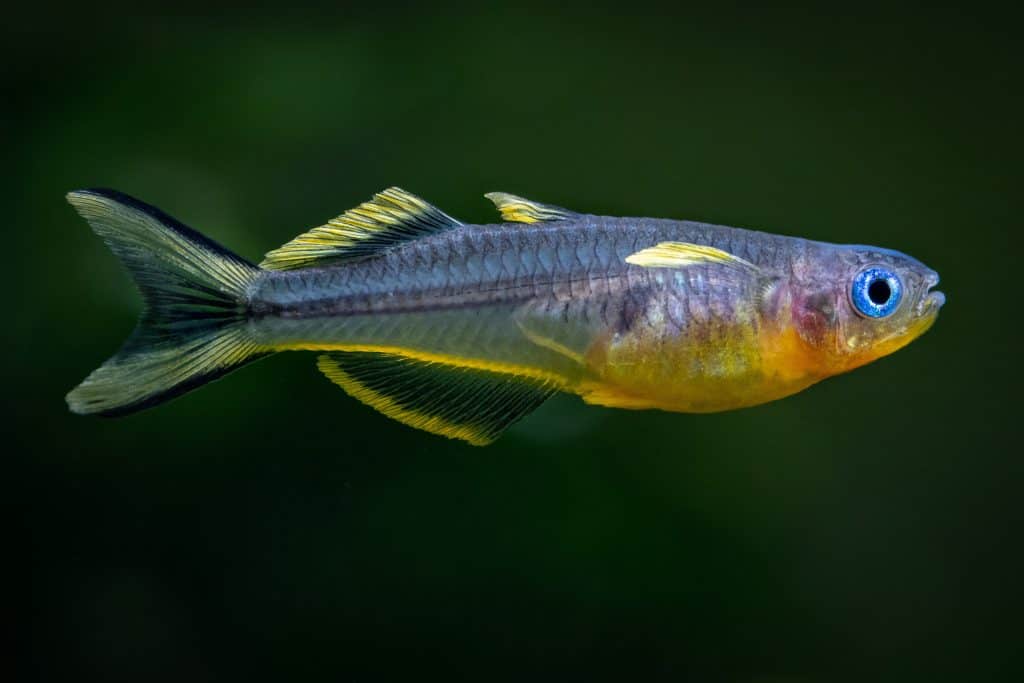 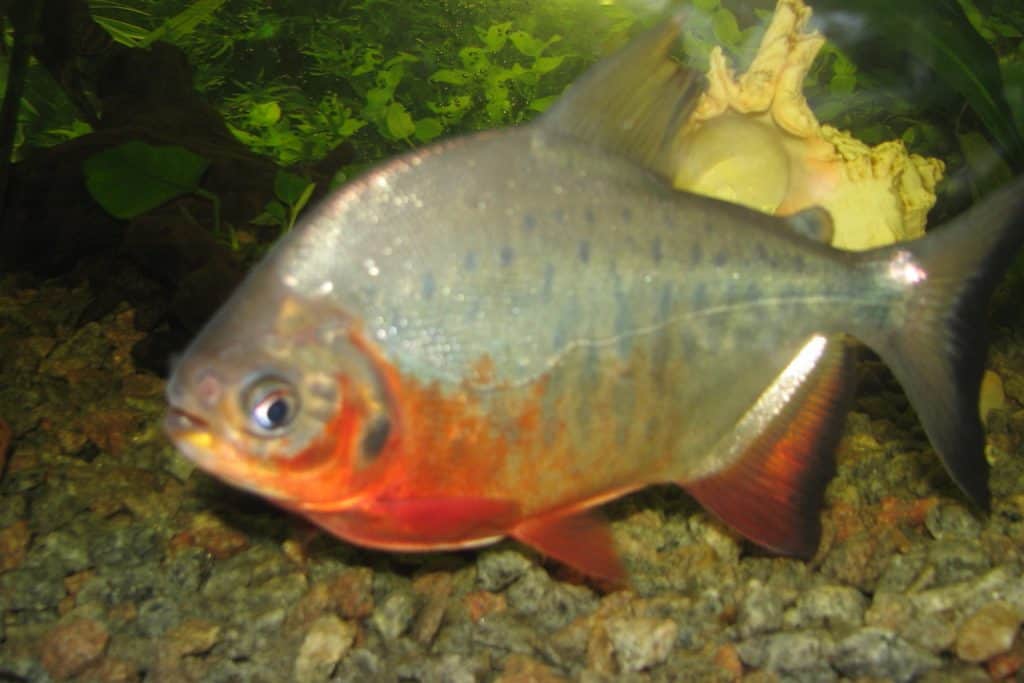